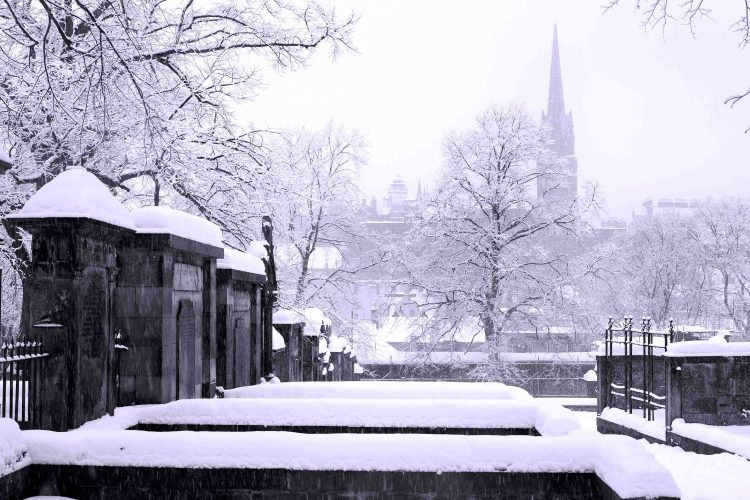 We have just returned from a pleasant trip up to Edinburgh, despite the weather keeping Billy Bragg from getting to his concert in Glasgow after we had braved the train journey over there, we did manage to see my daughter Rachel on Sunday evening an Karen’s son Bryan for a few days which made the visit worthwhile. Britain does not seem to have gotten a grip on dealing with snow and ice like other countries somehow,  I have never seen a city so deserted, mid afternoon Monday had the same traffic levels as you would expect at 2.am. Snow had fallen all day onto already compacted snow an ice and everyone seemed to have stopped at home, by Tuesday all trains were cancelled and buses seemed to be struggling too, we did managed to get Bryan back home however. The Scottish transport Minister apologised and gave the excuse as ‘having been given the wrong kind of weather forecast’. Today’s image was taken in Greyfriars Kirkyard which is supposed to be one of the most haunted sites in the world, I  have not been there for years my last visit was with my young  daughters who wanted to see the statue of Greyfriars Bobby.  More tomorrow if I manage to get on the site as I still seem to having difficulties posting.